What the Heart Wants: Prologue 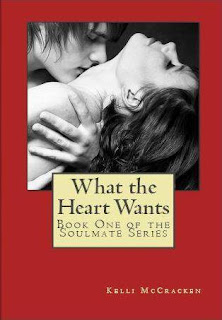 If it wasn’t for the pounding of his heart, in his ears, he may have been able to enjoy the picturesque spring day, with birds chirping and singing. An occasion butterfly came floating by while the sun cast its warm rays to the world below it. This vibrant season was his favorite and had been, since he was a child, but now there was something even sweeter about it. The thumping of his heart was proof of what had changed. It was the season of love … and the season that he found her.
The air between them smelled sweet. The delicate aroma of her perfume mixed with the honeysuckle that grew against the fence, not far from where they were standing. The limbs of the willow tree hung about them with bright green leaves, helping to shade some of the sun from their faces and bodies.
She was staring at him with the most beautiful eyes; they were warm, inviting, and the shade of marmalade. The smile that spread across her lips made his heart skip a beat … or several. He hadn’t counted them, but he knew his breath was getting heavier, especially when she pressed her body closer to his.
He wrapped one arm around her waist while the other moved toward her face. When he cupped her cheek, she closed her eyes and sighed. He could feel her heart beating against his chest. It was in perfect rhythm with his, and each rapid thump drowned out every other thought in his head. Nothing was more important that this moment.
Her lips seemed to call to him, as did her mere presence. The force that drew them together was so intense. Neither could honestly deny it, nor did they try. He was still in awe of her and the feelings she evoked deep inside of him. No one had ever made him feel like this, to want someone as much as he wanted her, and she seemed to feel the same way.
When he noticed her eyes open, a smile crept across his face. She was still smiling at him when their eyes locked once more, and everything around them faded to black.
“I love you,” she said softly.
“Not as much as I love you,” he answered.
“You think so?” she asked with a curious look. The smile on her face stretched into a grin as she leaned closer to him and whispered, “We’ll just have to see about that.” It only took a second for her to stand on her toes and wrap her arms around his neck. He felt his heartbeat increase as the distance between them minimized, and she touched her lips to his in a soft sweeping motion.
He let out a soft groan before pulling her against him, with one hand, and cradling her head in his other. His fingers tangled within her brunette curls, but she didn’t seem to mind.
Without a second to lose, his lips fastened to hers in an explosive kiss. It was intoxicating, to say the least, and unlike anything he had experienced or imagined. Unfortunately, the ecstasy was short lived. He felt her backing away from him, and an indescribable pain filled his soul when he saw the stern look on her face.
His heart ached as he tried to understand what had happened to initiate her change of heart. “What’s wrong?” he asked in a voice thick with worry.
She shook her head slightly as her face filled with anguish. “I love you,” she uttered, “but your life doesn’t include me yet. It’s time for you to wake up.”
“What did you say?” he questioned, feeling more confused by the second.
“Wake up, my love,” she whispered as her image began to fade. “Wake up, now …”
Just like that, she was gone. His body jerked into a sitting position as he gasped for air. Staring around the room, he realized that he was no longer gazing at his golden-eyed beauty but at the beige colored walls of his bedroom. They might as well have been bars to a prison cell because he definitely felt trapped. The living hell of his dreams was trapping him.
That’s when he realized what had happened … and it wasn’t the first time. It was just another dream.